Warning: "continue" targeting switch is equivalent to "break". Did you mean to use "continue 2"? in /kunden/497738_83224/webseiten/fouropeneyes/wordpress/wp-content/plugins/all-in-one-seo-pack/modules/aioseop_opengraph.php on line 843
 Venice by kayak | fouropeneyes 
Warning: count(): Parameter must be an array or an object that implements Countable in /kunden/497738_83224/webseiten/fouropeneyes/wordpress/wp-includes/post-template.php on line 284

Warning: A non-numeric value encountered in /kunden/497738_83224/webseiten/fouropeneyes/wordpress/wp-includes/formatting.php on line 3407

That was easy- our first thought, after we had paddled in our two man kayak through the wavy waterof the laguna just outside Venice. Finally we left the open water and reached the first small and pretty quiet canal, the Rio della Misericordia. Misericordia- mercy: What a perfect name for the first canal to paddle through this morning.
With the Tronchetto parking space for caravans (including running water and electricity), which has direct access to sea we had found the perfect zero point to start our kayak ‘adventure’ day in Venice. But the night in our camper cabin turned out to be fitful due to strong wind and heavy rainfall. We feared the dawn to come, as we expected a rainy November day and us kayaking through foggy, grey Venice. But now we were here in the ‘stream of mercy’, the overcast sky started to clear and Cannaregio, one of the most beautiful local districts of Venice was bathed in golden autumn light.

We slowly drifted along small bars, cafes and restaurants. Their chairs and tables were placed very welcoming along the waterfront, but as we just had started to paddle and wanted to see more of Venice, even the best Italian cappuccino couldn´t stop us. Bummer- we didn´t find such an authentic, beautiful and relaxed area the whole day.

Yesterday we were walking over this chaos of bridges and today we had the chance to explore the city in a low angle of view- what a fascinating change of perspective. 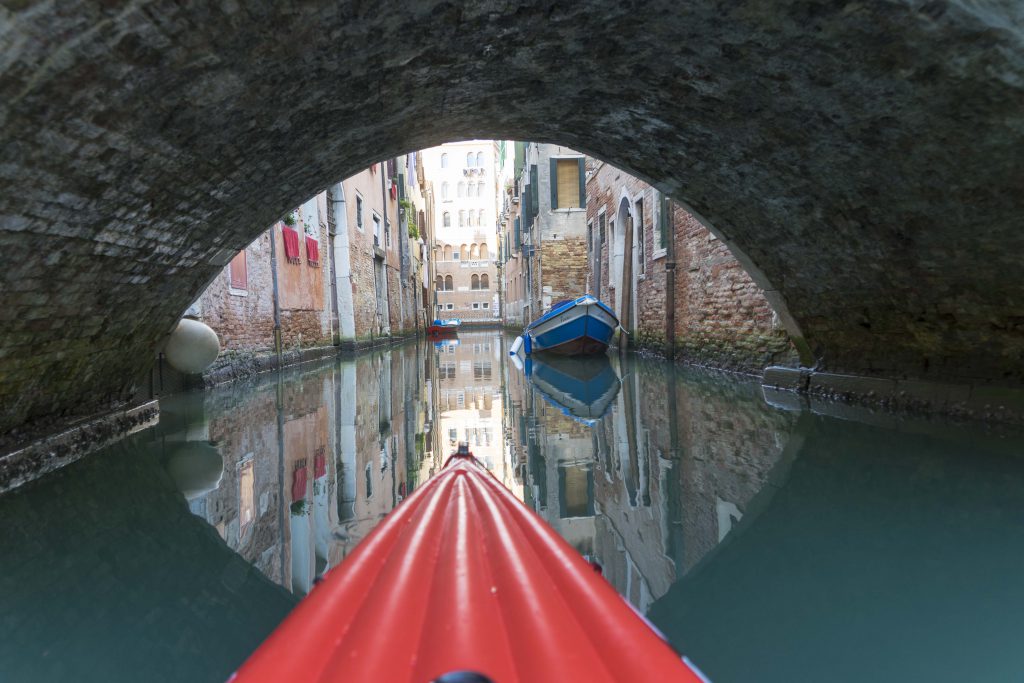 As you can imagine, from the kayak the decay is more evident, but this is also part of the charm of Venice. In the morning it was high tide and the water was 80cm higher than usual- at some places the brittle entrances were full of water. Some foundation walls were washed out. Incredible how these houses stand the water for centuries. 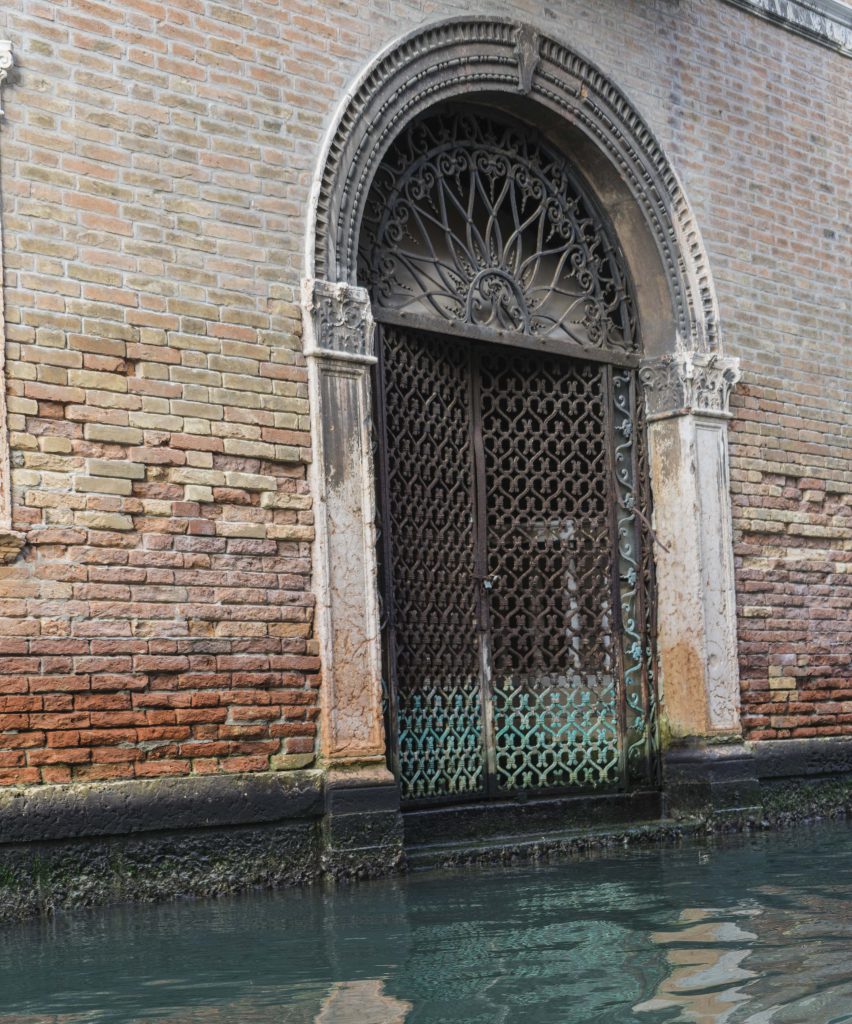 We paddled through small canals and under more and more bridges and came closer to the old and touristic city center. Over there the first gondola appeared. Exciting! But this was not the only change: The closer we came to the center, the more crowded it became, with tourists everywhere. 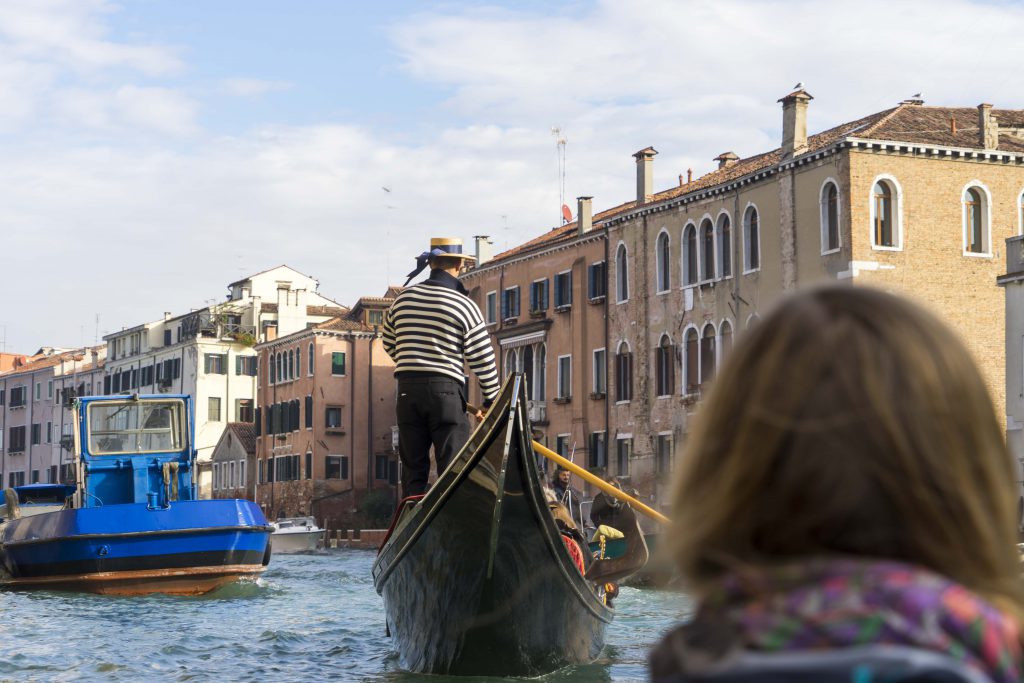 Here we experienced a situation we only know from travelling Asia: The two of us, in our Grabner Sports kayak, became a tourist attraction! Just because we were paddeling through Venice. People were standing on the bridges and taking photos of us! Hopefully we inspired them to explore Venice by kayak during their next visit, as it is an easy and quite relaxed adventure and does not require a lot of experience!

For the gondoliers canoeing tourists were yesterday´s news. But nevertheless all of them were really friendly and helpful to us during more difficult maneuvers. One just needs to keep in mind, that they are always going on the left side instead the right because of their long paddle, which is on the right.
Finally it was 1pm, now we felt well-adjusted to navigate through the bigger canals, like the canal grande. These wide canals, where you also find the public transport boats (vaporetto) and lots of water- taxis are only open to kayaks after 1pm on Saturdays, (on weekdays after 3pm, the whole Sunday). 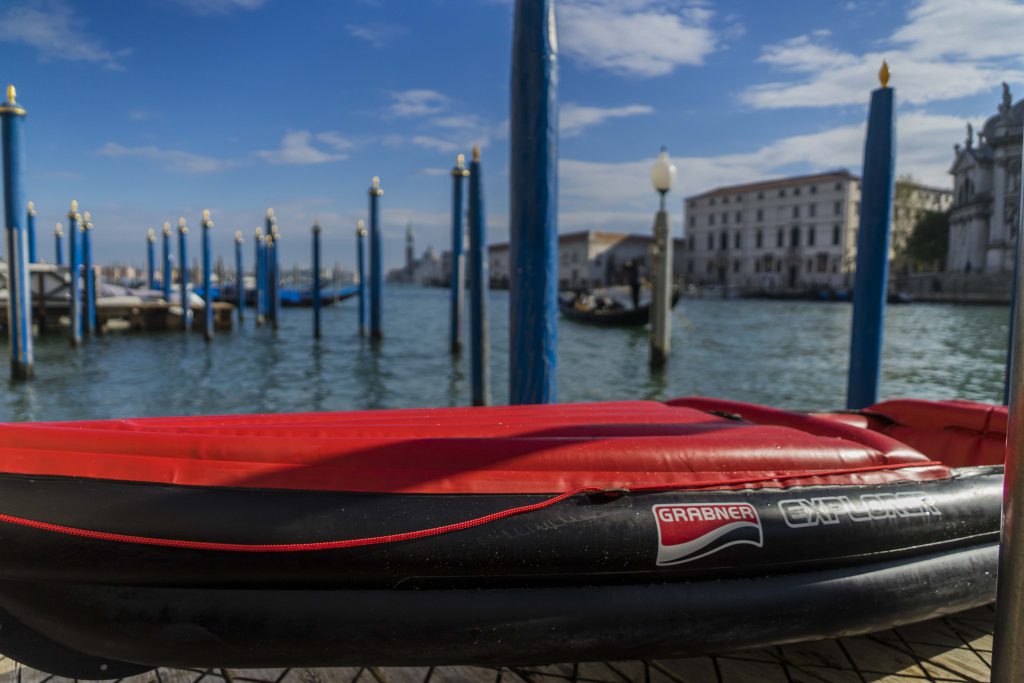 After paddeling into the Canale die San Marco and observing the busy Piazza San Marco with the impressive Palazzo Ducale we decided to look for calmer canals. We turned to the left and were lost in a net of tiny streams, places were you never would have access without a boat- what a bless! The water was lying completely calm like a mirror in front of us- the reflections of the yellow houses and the blue sky amazed us! We could not believe how lucky we were to have the chance to explore Venice off the beaten track via the very our versatile Explorer boat. 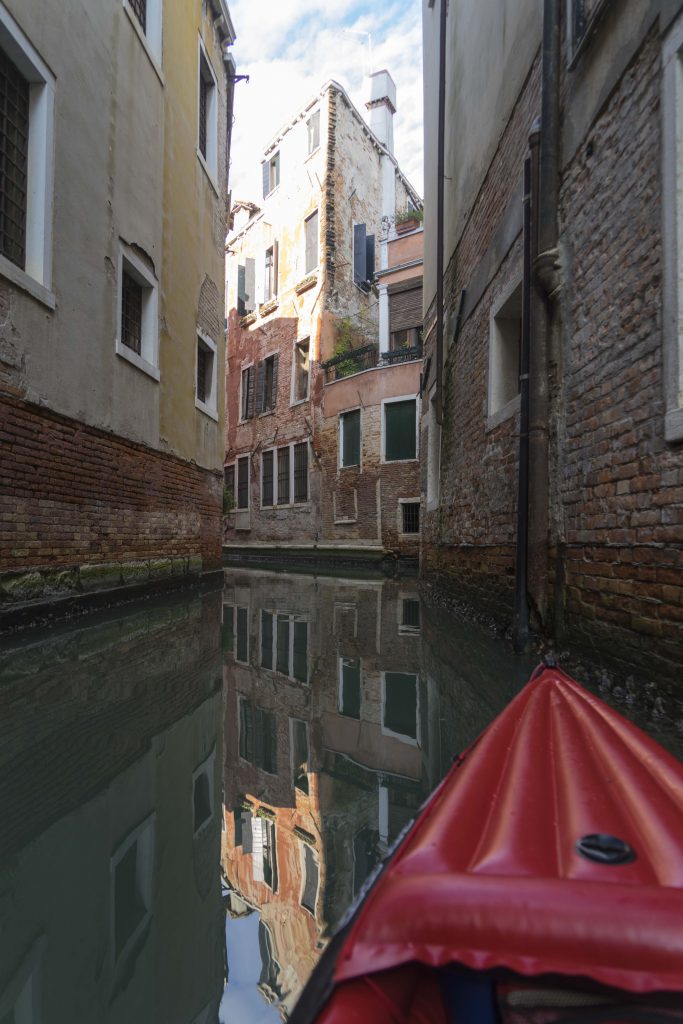 Where to start your kayak tour through Venice?

Who wants to avoid the much frequented waterways of the lagoon, we recommended to start your kayak tour straight in Venice. At Tronchetto parking there is behind the parking garage next to the Bus parking lot of a separate caravan parking place, with running water and electricity. Parking next to the sea gives you the possible to start kayaking in front of your caravan! Be careful- this luxury costs a little bit! You always pay for at least 12 hours- 24 hours cost 37€. But who told you Venice is cheap! But look, at least the view is rather beautiful:

The top life hacks to explore Venice by kayak!

We use cookies to ensure that we give you the best experience on our website. If you continue to use this site we will assume that you are happy with it.Ok